Normally, I don’t do a “U SUCK (insert game development company here)” because it doesn’t do any good.  But things have been so thoroughly bungled in this launch that I have to say something or I’ll explode.

No, it’s not anything to do with the servers or gameplay.  It’s to do with community building.

1. Guild Allies and Adversaries.  For months, guilds were told to pick their allies and adversaries and that Bioware would “try” for them to be on the same server.  From the reports of several guilds I know, this was not even close to the case.  The assignments were no better than random. Because the assignment were given hours before pre-launch, this caused guilds to be scrambling at the last moment to make arrangements that they could have made months ago, had they known that the allies and adversaries system was not going to work at all. Which leads me to…

2. Forums were Down.  Ok, forums need to be down for maintenance, I get that.  But having the entire community site down, private messaging included, when you needed to coordinate with other guilds after the allies thing got borked was awful.  You couldn’t even SEE the guild members of any guild, let alone try to speak with them.1

3. There are no server forums.  That’s right.  The forums are back up with no forums for servers.  How are we supposed to reach out to our community from THAT?2

In SWG, each server had a community and a culture.  People who played for even a year still remember people on their server who were not in their guild.  In WoW, we barely had that from the beginning, and it was eroded by the dungeon finder and server transfers.  Each guild was essentially an island.

A week ago, I really thought that Bioware was trying to build server communities and was super-excited.  Now, I feel like we’re slipping into “each guild is an island.”  And I don’t like it.

SPOILER WARNING: This post contains the identity of a romanceable male companion for the female republic trooper and the identities/characteristics of other romanceable companions in the game.  It does not reveal storyline of those romances, as I have no idea what they are.  Enter at your own risk.

I know you might be jumping about with glee, but remember… the SWTOR mouse is not the only one on the market with the 12-button grid on the side.  Both the Naga and the Naga Epic do too.  And I know from beta that the Naga works fine, and there’s no reason to think the Naga Epic would be any different.

So, as much as you like the imperial logo, I’d advise looking at pictures of all 3 of these, and deciding which looks most comfortable for you.  After all, you won’t see the logo with your hand over it.  At first glance, it appears that the SWTOR mouse has grid buttons that are more raised and defined, while the Nagas have a flatter grid area.  This is ultimately personal preference.  Also, do you like a corded mouse or a cordless?  Naga is corded while the Naga Epic and SWTOR Mouse are both cordless.

You can always use a sticker for your logo of choice.  Pick which mouse will work for you.

OK, I am totally freaked out about healing without addons.  But we can’t always have everything we ever wanted… so I’ve come up with the bare minimum to make myself comfortable.

As a side note… my Naga works beautifully.  It is making me considerably less stressed.

1. Move all the things

This is kind of self-explanatory.  If I can’t change the frames, I can live with that, but I need to move them to an appropriate location.

OK, right now I’m seeing 4 bars that’s IT.  I need a place to put all my stuff.  These limited bars just do not cut it.  Especially in their, ahem, current positions.

And that’s my list.  Am I missing anything essential.  I mean seriously cannot-live-without?

So, I feel like the designers are trying to draw attention to certain things…

I must be imagining things. Either that or this person is directing me to a black hole where I will fall through the server and die. Because General Chat is Never Useful.

I’m trying to be a good person.  I really am.  But, sometimes you just gotta say “Jedi Code, Schmedi Code.”  If you mouth off to me, I will force choke you.  Kthx.

Short answer: I have no flippin clue.  I haven’t been able to get too high level.  HOWEVER… I gathered some links for you.  For funsies.

Healing Comparison on the MMO-Champion Forums

And, of course, for all healers, join the Force Heal forums.  I think of them as kinda… Plusheal for SWTOR.  Things are starting off slowly, but if you build a website, the community will come.

Step 1:  Show party frames as raid frames.  Oh, excuse me, I mean “Operations Frames.”  At least that way it looks more grid-like, and your own frame also shows. 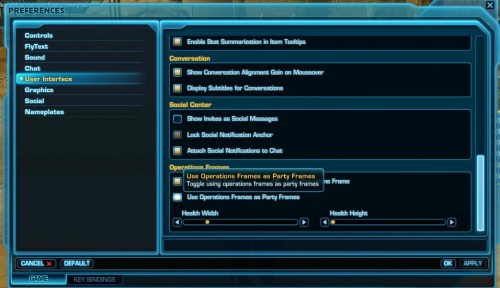 Step 2: Right click on the little “people” button on the top of your “operation frames” to bring down the “unlock” menu. 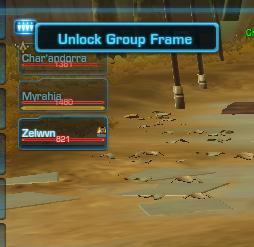 Step 3: Move that sucker wherever you want. Then you can right click on the little people again to get a menu to lock it back down. 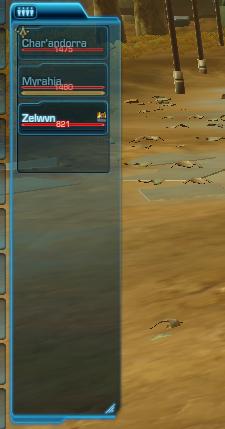 Hopefully this will help you this weekend.  Happy beta-ing!

Edit:  A while after posting this, I ran into a very complete video on the topic that includes instructions on resizing the actual health bars (make them bigger vertically or horizontally).  Here it is!