A place for jedi and senators to talk about jedi and senator stuff, make presentations, have lunch.  Why can’t they just meet in the main senate building around the corner on Coruscant?  I don’t know.  Shut up.

The weekly seasons changes are great!  They allow me to get most of it done, around my schedule.  Most of the time, it’s pretty flexible.  Things like “get x number of syndicate plans” can be done in a variety of ways.  A few crafting items too.  A+ on that one.  I just got my very own imp fleet stronghold and am saving up for the pub version.  Not too long, I think.

Obviously what’s not to love about dual spec.  OR 10-spec as the case may be.

In general, I’m having a bit of indecision because I’m kind of afraid to screw up my favorite toons.  What if my secondary style gets nerfed into oblivion or becomes something I like less?  Guides aren’t even available for half the styles.  So… I’m leveling alts I don’t care about to try it out.  Dumb, I know.

A small gripe about loadouts

Restrictions on switching in groupfinder queue SUCK.  One of the things I was looking forward to is to do missions in dps spec while I waited for my heal-fp queue to pop.  Nope, gotta sit in heal spec until it pops.  Boooo, I say.  In addition, it is still possible to queue as “heal/dps” but then if it slots you in as heals, you can’t actually switch to your heal spec.  That is very very dumb.

Very short.  Enough said on that.

(2) Must start story from Ossus

I have a bunch of lvl 75s.  Some have been leveled using the story.  Some ran flashpoints.  But the closest to legacy of the sith content I can get is starting from Ossus (which gives almost no xp to a level 75).  Then Onderon.  Then Mek-Sha.  Repeat.  I’m dying of boredom here.  By the time I get to Legacy of the Sith, I’m at 80 and don’t care.

I’m not happy about having what I consider to be must-haves behind a choice wall.

Scoundrel crotch kick is no longer baseline.  I can’t spec into it because I need to spec into “clever surrender” which makes my dodge drop threat.  And the reason I need to do THAT is because they removed my threat drop!  A healer that can’t drop threat is a dead healer.  And disappearing act has a depressingly long cooldown.  Without crotch kick, I have limited options for hard stun, depending on whether the mob is a basic or higher level (thermal grenade, flash grenade – which is also behind a choice wall).  Hard stuns are kind of important for some mechanics…

Commando hold the line also no longer baseline, and there is no longer an option to make it speedier.  This means that the only effective way to get out of the bad is booty scoot.  I fully admit it is my own incompetence that makes this a huge problem.  I need my speed boost to go forward.  No matter how much I practice with swiveling the camera and tapping and all that bullshit, I run into walls or off cliffs.  No thank you.

What do you think about the changes?

The theme behind the one is a natural history museum.  I saw the upstairs, saw the Krayt Skeleton, and had to have it.  Everything was built around that.  There’s a petting zoo and a planetarium.  It really came together during this most recent furniture sale when I could buy snow globes (ecosystems) and luxury loveseats for the planetarium.

This stronghold is decorated to 50 percent and it’s DONE.  Trust me, you don’t need to get Manaan to 100 percent if you’re satisfied with how it looks.  The quest for 100 percent can lead to clutter (dark side, totally).

So it’s been a while… because I’ve been decorating.  Previously I focused on fashion for good reason — if I focused on something else as crazily as fashion, there’d be no room for anything else.  For the longest time I had one lonely stronghold that I lazily decorated, but

The stronghold bonus is a gateway drug.  Just unlock them, they said.  You can leave them empty, they said.

So I unlocked them ALL.  I learned I definitely cannot just leave an empty stronghold.  For the last six months I FUSSED.  I started out with crafting and rep decos and then transitioned to buying cartel items from the GTN when I finally had cash.  Always Be Upgrading!

This is boring, on to the pictures!  The most “done” of my strongholds (that’s a lie, they’re never done) is the Kaas City one.  The theme behind this one is a military outpost for imperial intelligence, for briefings, meetings, and whatnot.

Note, I’ve tried to bring decent lighting to my strongholds so none of these images have been retouched.

Just a boring front office, nothing to see, definitely not a secret military installation, carry on.

Yes, I know, I’ve been a posting slacker.  No apologies, been playing, not posting about playing.  Also been making awesome outfits!  Today we are going to talk about my magneto hat. It goes with all things gold and keeps the sun off baldy’s pale, pale scalp.

For some of these I had to individually dye the hat (primary color, no secondary, so black/whatever).  Totally worth it.  You may now be jelly.

After months away, I come back, and realize that I haven’t finished all my consular companion quests yet.  Fortunately, the only one who matters is Qyzen, because you have to schlep somewhere.  Everyone else can be talked to on ship.  My quest log says Qyzen wants to go to Tatooine (or Taris, somewhere), so I get to the spaceport, summon him and… 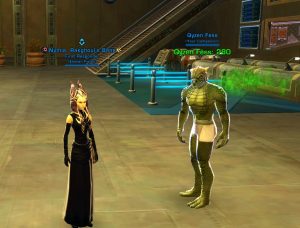 What the HELL, dude!  Why are you in your panties in the spaceport?

I quickly pulled some gear out of my collections for Qyzen’s dignity and moved on to addressing the rest of my crew on the ship.

What have they been doing while I was gone?

I will leave you now with the fun thought that in my stronghold, almost every day there is a random naked companion bugged out in there. 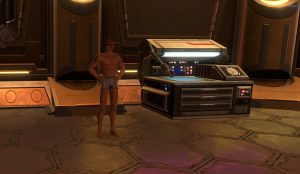 She learns so quickly!

No, seriously, the cleanse button on my naga is sticking. So I used compressed air and it works… most of the time.

The next day, it was prime day. And what do I see? Razer peripherals up to 50% off…

We all know what happened next:

Well except I saved so much money that I had to pick up one of these:

So um yeah, shut up, I’m stuck in this house and I deserve shinies.

The impossible has happened. Little Jedi is tanking on her Assassin (she is a big fan of stealth classes). And she likes it!

We all already know she’s good at it. She is my spawn, after all.

She runs in there screaming “Hey I’m Mr. Meeseeks, look at me!”

We can discuss later whether it’s good parenting or awesome parenting to let her watch Rick and Morty.

With LJ’s already considerable tanking skills, my healing skills, and dad’s pewpew, we attempted a veteran flashpoint – you know, the kind where you are supposed to be able to bring in 4 dps and bullshit your way through it.

We got Maelstrom Prison. It was not bullshit. We had a dedicated healer and tank and wiped. We looked up all the mechanics and were doing what we were supposed to be doing. Still wiped. Multiple times.

Dude, fuck that flashpoint right in the ear. If I get it again, I’m quitting and just eating the 20 minute lockout timer. As it is, we’re now afraid to do a flashpoint on the republic side in case we get it again.

So the other night, I’m roaming around SWTOR and I send Little Jedi a tell.

LJ: What do you want me to do about it?

OK fine, teens don’t want to play with their mommas. Whatever. Last night:

LJ: Excuse me but who is this?

Me: UR MOM (no seriously)

Me: But you were very polite when you thought I was a stranger

My bad for not giving her the names of all my alts.