So, everyone has their thing.  Some people want the coolest mount, others want some sort of glowy glowstick that is a different color, some like minipets, etc.  I’ve decided my thing.

Each companion will receive a customization.  It doesn’t matter that the companion looks fine now.  Or if I almost never use that companion.  Or even if it’s a wookiee.  Each companion gets customized.1

Now, this seemed expensive at first, but it’s actually quite reasonable if I have my main fund my alts.  Even with the more expensive kits, it’s under 100k per toon, spread out over 50 levels.  And the first companion gets a freebie, so if I’m satisfied with that, I’m set.

It can get a little awkward.  Like… I’ve known Risha as an NPC for 15 levels and then she became my companion.  We’ve had extensive interactions while she had her “default face.”  So it’s going to take some adjusting to think of this new look as “Risha.”

Why?  Well I’ve noticed that many people, maybe most people, aren’t bothering with it.  and I really want to have a “unique” experience, so what better way than surrounding myself with customized companions.  Plus, if I end up rolling another toon of the same base class, I can customize my entire crew in a completely different manner.  Funsies.

Where to Get Customizations

OK, here’s a great list.  I know for a fact that the Taris, Balmorra, and Belsavis vendors are in “safe” places in the intro towns when you first arrive on the planet.  Once you have a ship, you can trot out to a planet that might be well above your level in order to get a customization  kit for a companion you just acquired.  I went to Belsavis at a way lower level than I should (to get Akaavi’s customization), and the customization vendor is right in the starting area and accessible without running into any nasties.

For some first companions, you get a freebie kit as a quest reward.  You choose 1 of 3.  However, do not fear if you choose the wrong one!  The others that you did not choose ARE still available at the appropriate vendor.

You can preview customizations for your companion regardless of which companion you have out.  Control-left-click on the companion customization (as the tooltip says) and your preview window will pop up.  Then switch to the “companion” tab.  At the top of the preview screen, there are arrows.  Use those to scroll through your companions until you find the right one.  (You will probably have to control-left-click again to toggle the preview if you don’t see it.) 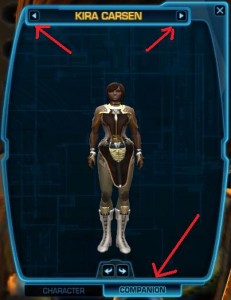 Yes, the preview is crappily small and there’s no way to zoom.

Pictures of them all?

My Companions (so far)

Now the part you were skimming for: the screenies of MY companions.  Taken on their respective ships, so they stand still when I’m trying to take screenies.

During Corso’s “photo shoot,” Customization 2 DISAPPEARED.  It was terribad.  I put in a ticket.  Still waiting.  For now, he is wearing his bucket helmet until this is resolved.

Bowdaar’s customizations do not change his colors but affect his visible gear.  No armor that you equip on a wookiee shows up.  Customization #1 makes him nekked, but we can’t have a nekked wookiee running around the ship!

It was very weird changing Risha since I had interacted with her default self for 15 levels.  I tried to find a face that matched her attitude.

To be fair, her original hair was matronly, and I think this is an improvement.

I confess, for zabrak females I prefer hair to horns-only.

I just used the freebie customization #3.  It’s a droid.  I’m not that picky.

Kira is already so cute, how do you improve on cute?

Strangely, now with customization #1, Kira looks like a darker, thinner version of my smuggler.

Did you buy any customization kits for your companions?