The Hall of Shame has become super-large and unwieldy, and I’ll be revamping it in the next week or so.  Until then, I don’t want to deprive you of the latest and not-greatest.

First, let’s start with the horrific shirt that I thought would never make it off the PTS.  Man, I was wrong about that.  The dramatic exhibitionist  – I mean extrovert – shirt.

I am aware that I have complained in the past that bioware should make clothing items that show some skin but not all the skin.  However, this piece of crap looks like a two-year-old took a scissors to the Thana outfit.  This thing makes no damn sense.  If you’re wearing armor, the whole point of armor is to cover your organs.  And how the hell are those boobs staying up?  The force?  This gets an F-minus from me, and if I catch any of my guildies wearing it, they are getting a serious talking-to.

Moving on, people got creative with armor dye, because looking naked is so cool.  Also, we’re 12. 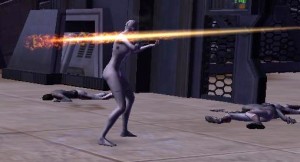 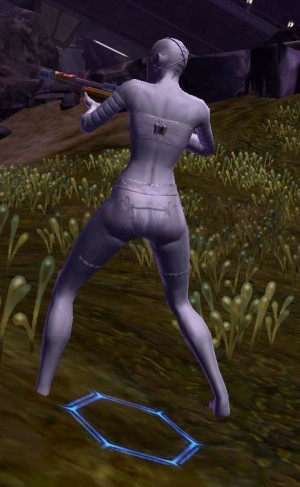 Yeah. Awesome.  And, I’m sorry, this one looks like pubes.  Dye better.  Kthx. 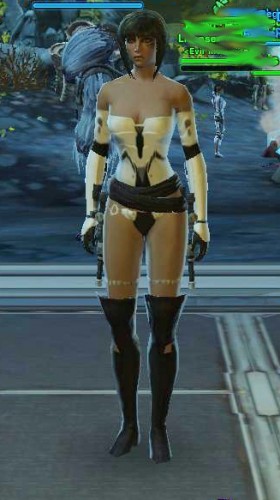 We are going to learn a lesson on glowy things.  As in: think before you just add a random piece with one lonely glowy effect to your outfit. 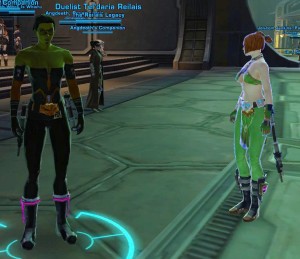 Finally, people are abusing dye.  Do not.

Finally, what you’ve REALLY been waiting for, Quinn in his diseased glory.

Notice how his hands and feet are blackened with gangrene.  It makes me happy.