Slacker has been slacking on updates and now it's biting me in the... posterior. Things may be wonky. Feed and email updates were broken but WILL RETURN.

Remember back when Issen tried to seduce Torian Bieber (AKA Bieber Fett)?  Yeah, that was interesting.  It felt to me not so much like an assertive female equal but rather a determined cougar trying to pry open his mandalorian codpiece. 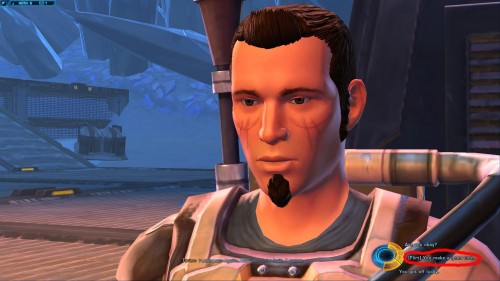 Flash back to the rep-side.  On that side, the boys have been more than receptive to flirting (Iresso pounces on any hints whatsoever).  Or not flirting (Doc never gives up).  Or saying very clearly “go the fuck away” (Cough Corso the stalker).  They are clearly interested.

But the imperial boys!  I think they’ve been spending way too much time frolicking on the gay planet with the way they dodge and weave away from very blatant advances.  Maybe they’re control freaks and need to believe that it’s their idea first.  Sigh.

***THERE ARE VAGUE REFERENCES TO HEARSAY SPOILERS, BELOW***

So, I know full well what happens with Dr. Quinn, medicine man.  It’s kind of a given more than a year after release, and the fact that he has made so many people so irate.  I was dead set to hate him.

But then they made him so cute. 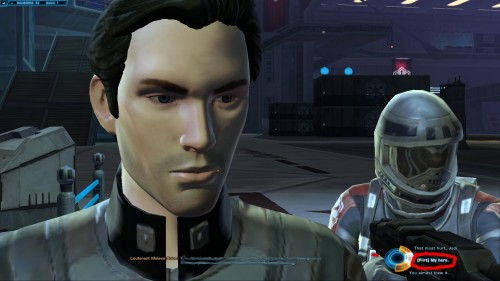 Thick dark hair, blue eyes, a hint of stubble, maybe a little too pale – actually he looks like my husband!  DAMN YOU BIOWARE.  Next thing I know, Njessie the srs bzns marauder is making googly eyes at this boy, despite his forecast future transgressions and rampant metrosexuality.

Will she enjoy it while it lasts and then force choke the shit out of him later?  Or save herself the heartache?  Stay tuned for the next episode in Days of Our Sith.