Ah, Torian.  Issen’s future love interest… I couldn’t wait to meet him (well… I could).

***Mild and potentially boring spoilers ahead about Torian Cadera, Bounty Hunter Companion.  You have been warned.***

First time Issen1 sees him, he’s hanging around other mandalorians and sucking up to her awesomeness.  He sounds considerably less awesome than the other mandalorian companion, Akaavi Spar… and much less manly.  Not sure if that’s a comment on him or Akaavi.

I call him “kid”.  This doesn’t bode well, considering yes, he looks like a kid, but Issen looks like she’s 12 too. 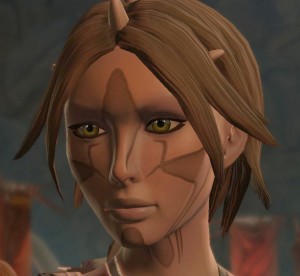 Later on, he enters my story and sneaks up behind Issen with a gun.  Of course, one of the options is this:

OK, how could I not pick this one?  Issen goes on about how she just wanted to see him again, he gets all flustered like OH HEY REALLY?…  and then Issen takes his pistol, knocks him down, puts a boot on his chest, a gun to his head, and makes a disparaging comment about men being stupid.  Mako laughs at him.

Unfortunately, I was laughing so hard, I failed to get a screenie, so here is a totally accurate depiction of what occurred: 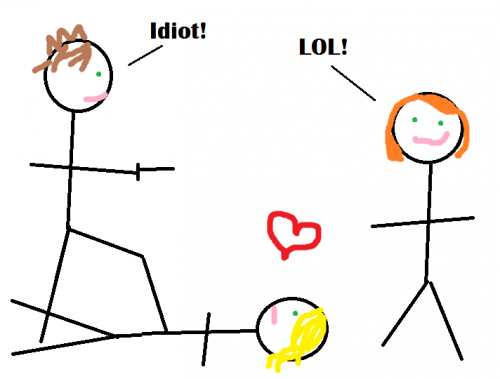 Clearly, the guy has got it bad for Issen.  So he joins the crew, I clean up his bieber-hair, and we start chatting it up.2

I picked every damn flirt option there was, and Bounty Hunters aren’t exactly subtle.  He basically ignored it.  Like he didn’t even acknowledge the blatant throwing-self-at-him by even looking eager or embarrassed.  From his non-reaction, Issen might as well have said “I like snacks” or “guns are nice”.  A far cry from his previous schoolboy crush that allowed Issen to disarm him.

So Issen tried giving him courting gifts.  Nope.  The big +0 of Disgust.

Great, so now Issen looks like this sexually harassing cougar while poor, innocent, young Torian is desperately trying to disregard her really blatant advances.  You know, all the other NPC’s were totally PSYCHED when Issen flirted with them.  There was even a BSOCK!  What’s wrong with this Torian kid? (Spoiler: It’s not like I offed his father – he did that himself. )  Things were getting pretty awkward around the D5-Mantis.

So, sigh, since he didn’t want courting gifts – fine!  Apparently a way to a man’s heart is through guns and ammo.  I learned that from Corso and Cat Bauer.  A few trips to the military surplus store later, he’s asking if Issen is single.  Har har.

FINALLY! Now I can get rid of some of those craptastic courting gifts… er I mean… woo Issen’s sweetie.  It’s just a matter of time.  Issen already has his pants in her inventory. 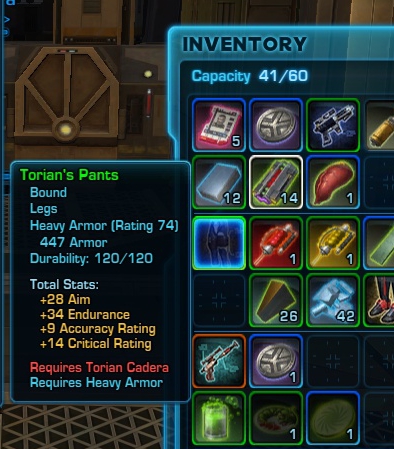