Remember, folks, you can always email me pictures of awesome fashion at njessi [at] hawtpantsrepublic [dot] com.

First, Shintar sent me a screenie of this interesting gentleman who is “apparently someone who’s well known for intentionally making his characters look ugly. What can I say but: he’s clearly succeeded with that one.” 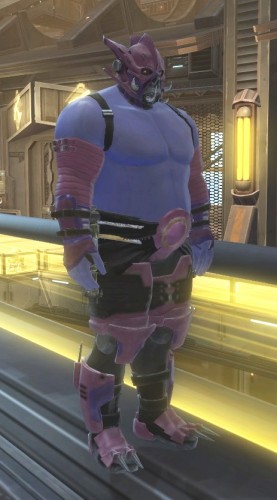 Shintar’s second submission “is actually a case of “not sure if bad fashion”. At first I kind of laughed at “the guy in the skirt”, but as I looked at him a little longer it occurred to me that with the bare chest and being all in white he might have some sort of ancient athlete theme going on?”

I’ll let y’all decide whether he belongs in the hall of shame.  I feel like the ancient athlete thing would work better if he didn’t have leggings under his skirt.

Skiggity submitted the ever-popular (and you’ve probably seen this on your server too) Terrible Bikini And Dye Ensemble.  “Another one, Purpler than before!” 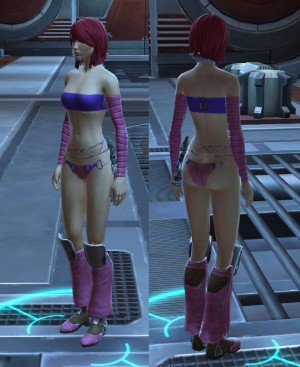 And to wrap it up, let me show you what I mean by “relaxed armor barbie.”

That’s all for today.  Let me know what you think!