So, I hit 55 on my Marauder, and it’s been a mad scramble to get my butt ready for raids ASAP. 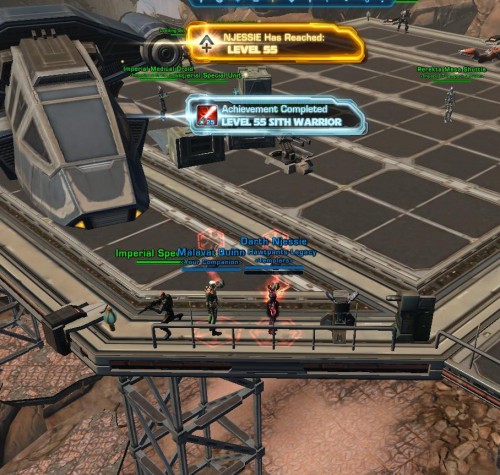 But it’s totally different this time!  Granted this is a new character, a new guild, a new raiding program, but unlike my first 50, I have resources out the wazoo.  Between my own crafters and the crafters of my fellow former-snarkers, I had gear before I even had the levels to use it!

I bought some badass lightsaber crystals which match my outfit, and I feel that I’m screenshot-ready for kill shots! 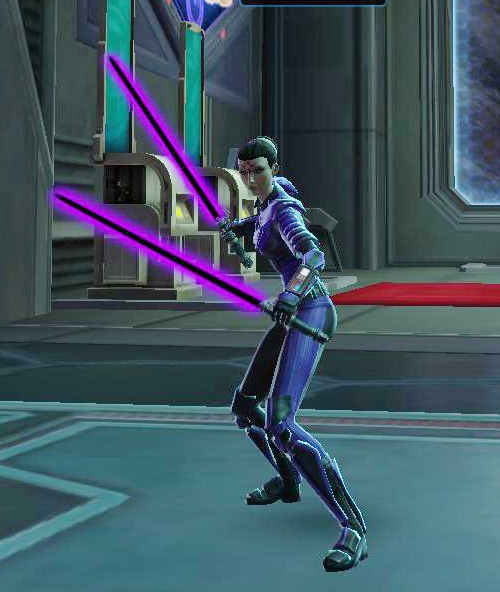 Everything is 66-quality except my craptastic relics.  I’m working on getting the comms to improve them.

(3) Augmenting all the things – Almost there

I have 12 augments slotted, 2 to go.  I’m not slotting the aforementioned 2 craptastic relics until I upgrade them.  I spent so much cash on augmenting items.  It is so sad.

For some dumbass reason, I have two maxed-out biotoons, so I’m cranking out some stims and adrenals, no problem.  Not worried at all about that supply.

Just because I’m a pure-dps toon doesn’t mean the group doesn’t benefit from field respec.  I will switch from Carnage to Annihilation, if the fight really calls for it.  (Usually it’s when I need-need a 6-second interrupt.)

I feel like a repair bot is unnecessary if I plan to be perfect and never ever forget to repair.  Ahem. Um.. yeah.

I haven’t done any of the raids, on any mode, on this new toon.  I don’t want to miss out on the “first time through” rewards because I was a dumbass and forgot to get the first-time quest.  Because nobody wants to wait for me to go through dialogue, that should be done well in advance of raid time.

Having said that, I got a little lost and, erm, I can’t find them on the Ziost.  Also, the Ziost is WAY COOLER than the Gav.  It’s kind of embarrassing.

Help me, Dulfy, you’re my only hope!  Multiple sources are always best, to really cement in what the fight looks like, so I’ll be searching around for some more guides.  There is no such THING as being overprepared.

I have a few hot dates with Mox and the target dummy in the next few days. It doesn’t matter that this toon is exactly the same as my main, or that I (mostly) know what I’m doing.  Muscle memory can always be improved.

So far, the resetting cooldowns on Carnage are proving to be a challenge.  And tracking the buff that we didn’t have to track before for force scream is total bullshit.  And the ability action queue seems “not quite right.” I suspect I’m being thrown off because the lightsaber slashy noises are slightly different than those of a Sentinel and it’s throwing off my timing and mojo.

But other than that, I’m doing awesomely!