I yammered a few weeks ago about what I thought about the Sentinel changes before I had a chance to test them.  Now I am playing with them and I’m going to share my incoherent thoughts with you.  (I’m in process of writing the 2.0 Sentinel guide but it’s not nearly done.  Also whilst writing this, the Dev Blog came out.)

Right now I’m leveling in Focus Spec, because it’s supposedly good AOE, crowd control, and other such nonsense for leveling.  Plus, it is the spec I know the least well.

From the dev blog:

Our intentions with Focus Sentinels in 2.0 are to continue to support their viable sustained damage, but to lessen the burst potential of Force Sweep. This isn’t solely about correcting issues though, so we’ve also added some gameplay improvements and better utility to Focus.

Yeah, no shit.  Force Sweep was nerfed to the ground.  Don’t get me wrong, I’m not really a fan of only being able to do reasonable damage once every 10-15 seconds, but still, now my AOE kinda sucks.

I am hating this spec.  I’ve done levels 51-53 and I can’t exactly put my finger on why I hate it.  I think it’s because there’s a lot of “charging up” you need to do for Force Sweep to be awesome (but less awesome than before), and when leveling, you just want to go in there and come on strong, like other classes can do, instead of having to charge up prereqs.

When I charge in, I have to Force Leap, then Zealous Leap (for the auto-crit to Force Sweep).  At which point I have no focus left and have to Zealous Strike.  Now, should I Force Sweep right now?  Or build Singularity to further enhance the damage of the impending Force Sweep with Force Exhaustion (and will the mob on which I cast Force Exhaustion croak before all 3 ticks are done?).   Are all the mobs closest to me already dead from the Zealous Leap and Zealous Strike damage, plus the damage of my leveling partner?  (If Zen is up, then I have both Singularity and focus, and I can pwn face, but it’s obviously not always up.)

I will say that Focus Spec has improved in single-target DPS because of the freebie Blade Storm that you get after a Zealous Leap.  Those things hit like trucks.

Moving on, I did my first raid in Combat Spec and it was quite a lot to get used to.  Devs say:

Combat has been criticized for being a little too simple to play. While they have lots of fun utility, their core rotation was a little boring. However, some players like a more relaxed playstyle, so it’s important to us that we don’t change things too much.

To that end, we’ve helped unlock Combat’s most fun utility (Transcendence, right?), and livened up their core rotational gameplay with a deadly new proc effect.

Relaxed playstyle my ass.  There’s nothing relaxed, now or then, about trying to jam buttons like a coked-out ferret to cram all your good abilities into a 4.5 second window.

I haven’t played around with Watchman because I think that the rotation has changed least of the three, despite being able to use (and find 5 focus for) Merciless Slash more often.  Oh hey, the devs said that too.

Watchman has always had a strong rotation with good sustained damage and utility. We didn’t want to mess with the formula to Watchman’s success, so we just made them better at doing what they already do.

I swear I thought this before they said it.  This will probably be my raiding spec just because I think I’m better at juggling varied cooldowns than trying to get my cooldowns to line up for a burst phase in Combat spec.

A final note: Twin Saber Throw is badass.  It fills a serious gap in our abilities and is usable at any range.  I’m not sure how it will fit into a standard spank-n-tank rotation until the math nerds start crunching the numbers. 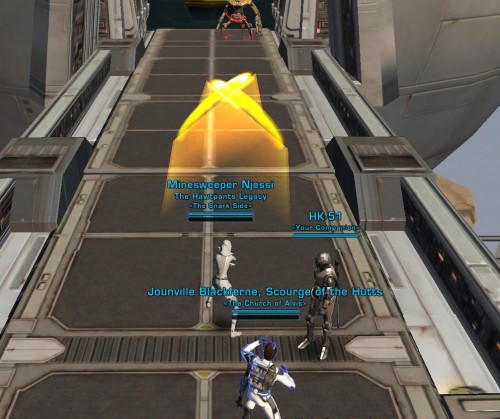