As you know, there’s no hood-down option.  And, for Jedi Sentinels, the vast majority of gear is hooded.  If I don’t want a hoodie, I have the following options:

Most of the medium armor sentinel hats are circlets that happily coexist with a hood.  Same with most sunglass-like hats.  All big ugleh hats will push back a hood (like smuggler hats) – but those don’t show hair and aren’t exactly an improvement on the hood.

But there are some sunglass-like hats, worn by my heavy armor wearing guardian buddies, that push down the hoodie but still show hair (these are the Star Trek wraparound glasses).   And I finally found a medium armor headpiece that shows MOST of my hair and pushes down a hood.  Double yay. 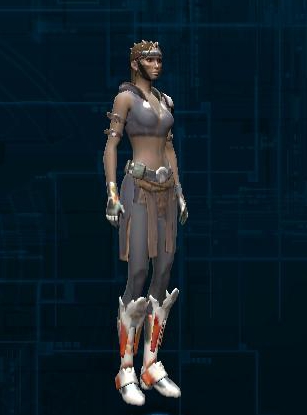 A simple level 23 armormech orange hat: Laminoid Battle Headgear.  It’s basically a circlet with a chin strap that one of my guildies says looks like a beard.  But most of my toon’s hair is sticking out so win!

Now I decided on the hoodie I want to wear:

And then put on the hat… 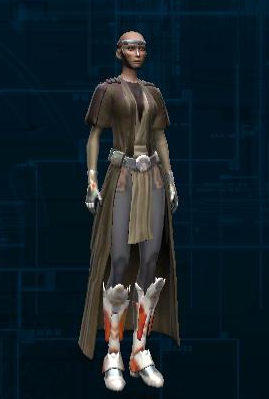 Yay, the hood is successfully hidden.  On the other hand, I’m bald and hornless.

This used to work properly and got totally broken in 1.2.  One of my male guildies with the sunglass-headgear discovered this when 1.2 hit and is currently running around bald due to this bug – but that’s all fine and dandy, because he’s a BOY.  And at that time, I didn’t care about this bug.  NOW I CARE ABOUT THIS BUG.  I’m so close to being able to wear a proper jedi robe without a hood and boo!  Foiled by bugs.

This bug is in the known issues thread.  I just hope it gets fixed sooner rather than later.

Also, there are sithies complaining about making out with a bald Jeasa Wilsaam.  We all suffer due to bugs.