Sigh, why do I even bother.  Nobody remembers Kramer versus Kramer.  I’m olde.

When we last left our intrepid Zabrak, profiting and plundering had occurred with former failteammate Gault.

However, now that we have funding, Lana and Theron think we need more warm bodies, which the Mandalorians can provide.  As a Bounty Hunter, this suits me just fine.  I love those guys!

Off I go to see Shae Vizla who has moved up in the world, but apparently is a little fuzzy on our former relationship.  You know, repeating the same quest to kill Revan every week.  We were BFF!  Now she refers to me as “the newcomer.”  My ass.

But our happy little business meeting is cut short by my sorta-ex-sorta-still husband coming in the door.  To my shock, he still has his customization kit on, so I am not subjected to his default Bieber-hair. 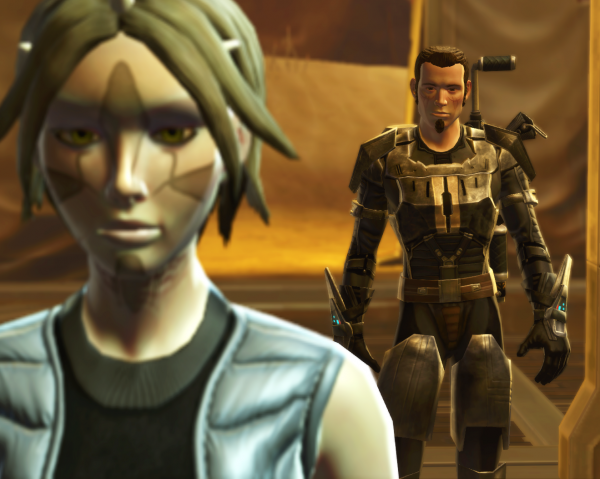 Speaking of shock, he makes this O-face that is precious.

He’s immediately wanting the smoochy smoochy, and I have a choice to make.  Welcome him back like I haven’t been playing hide-the-blowtorch with Koth… or stick with our now-least-favorite engineer who, despite still being technically on my crew, I haven’t seen since Chapter 10.  He doesn’t even write lame love-notes anymore.  A mando in the hand is worth more than a mechanic in the wind.  Looks like a reconciliation is about to happen… 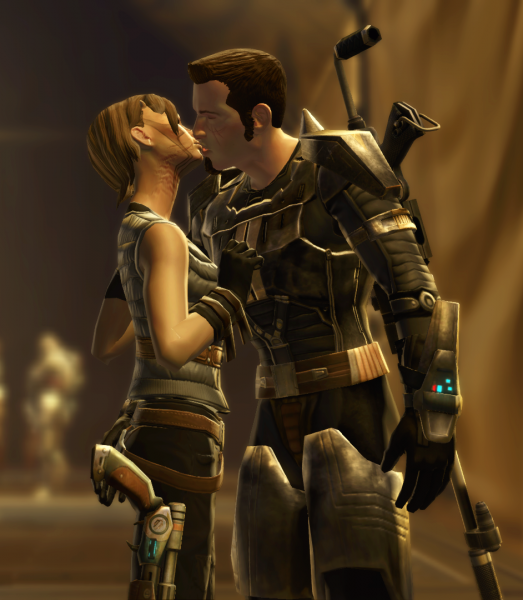 As with last chapter, there’s a bounty-hunter-specific conversation to be had with Torian.  Apparently he and Mako searched for me.  A lot. Together.  Mmmhm, but those in glass houses with rebel mechanics shouldn’t throw stones. 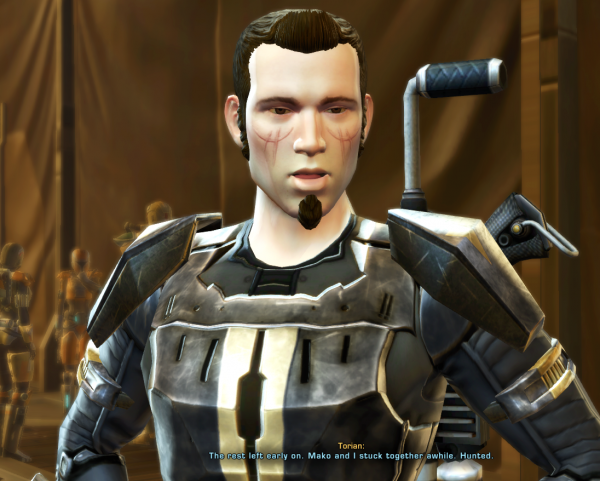 Then comes the Skytrooper portion of the adventure.  What else is new?  To shut down some shieldy thing.  Damn, I really should pay more attention to strategies since I am the leader and whatnot.  It’s hard to pay attention when you’re back on Darvannis with sand in your space-undies.

At which point, I find out that Shae’s dumbass plan was to send her own people into the blast zone and blow them up with the badguys.  Something about honor.  I help them escape instead of blowing up whatever I’m supposed to detonate, and Torian is mad.  Too bad, so sad, loverboy.  Sleep on the couch. 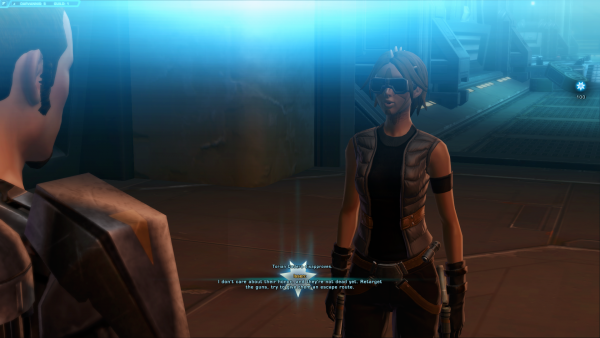 More fun and games blowing shit up occur afterward.  I get a holocall from Lana telling me that Mandalorians who are bloodthirsty may not make the best permanent allies.  This from the queen of duplicity.  Plus, who does she think she’s talking to?  These guys are my peeps.  I tell her to STFU. 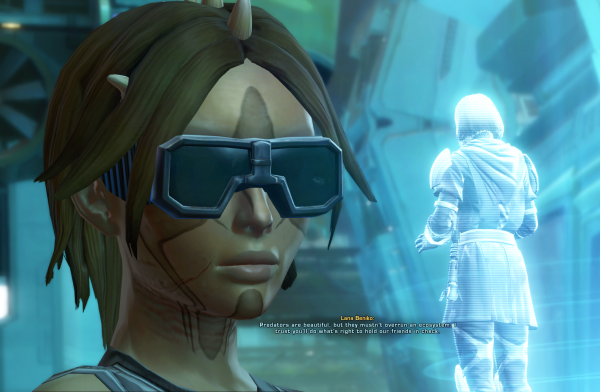 We come back and Shae berates us for not following her dumbass plan.  Sigh.

Somewhere in there, I have The Talk with Torian.  He tells me that he’s never leaving me again, and I ponder what to say, but it’s not really that much of a decision seeing that Koth is absentee.

I get this lovely popup that says if I resume my romance with Torian that will end any other romances that I’m involved in.  Good!  I wanted to be rid of that jerk Koth anyway! Bam! I’m married again. 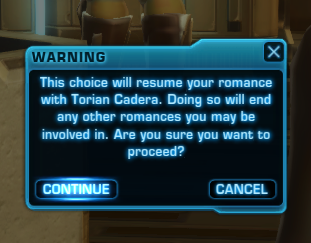 Our happy couple holds hands while the mando-buddies celebrate by throwing fire everywhere and shooting lasers up at the sky.  And punching each other.  Funsies. 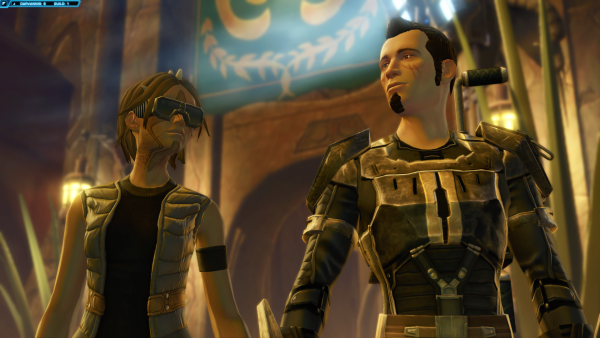 Our journey is not finished though.  We have to get Scorpio a robot that looks just like Scorpio because um… hacking. 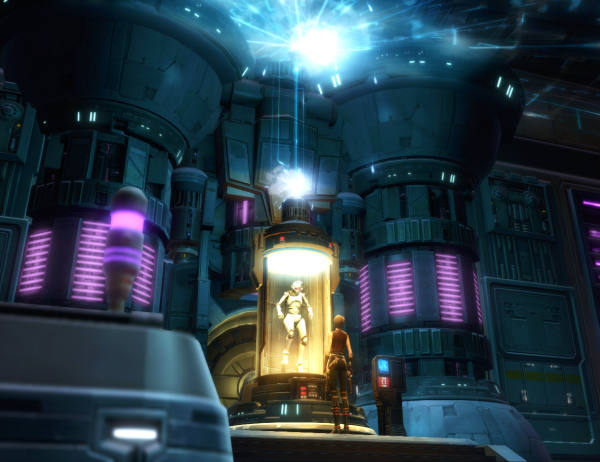 Once again, not paying enough attention.  When we turn in said robot to Scorpio she sounds all sincere about helping us but there’s an evil-foreshadowing glance somewhere at the end. 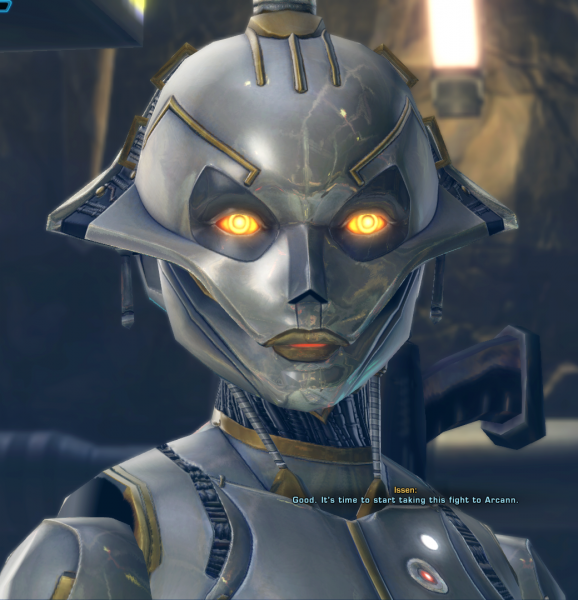 I think I’m done but the chapter tells me to return to my quarters and… Koth is there.

Um, where were you for the last 3 chapters, and NOW you show up?  Shiiit.  I almost logged off but being a relationship coward in a video game is too embarrassing.  I put on my big girl space panties (now without any Darvannis sand) and had The Talk.

“Looks like your special someone is back in town,” he says.

Yes, my husband, who isn’t dead, bee tee dubs.  Where were you?  My options for responses are along the lines of “it’s not you, it’s me” or worse.  Sigh.  Whatever I chose in this chapter, I’m the asshole.

Time to listen to Space-Tori-Amos (that’s breakup music, right?) and ponder chapter 15 where Scorpio is totally not going to do anything evil.