Did you know that about 1 in 10 men have some form of color blindness?  Let that sink in for a sec.  And now look at your raid roster.

Throughout all my gaming career, I hadn’t up to this point met someone who was color blind – or at least not in a situation where it would matter.  But in raiding, it matters, as I’ve discovered with our newest recruit who is, in fact, color blind.

How many instructions in your raid group involve “get out of the red shit on the floor”?  How would you rephrase that to make it understandable to someone who sees shit on the floor differently?  With the red “Fire” raid marker hard to see, what would you use for first target in kill order?  These are all little things, and definitely easily fixed, but it does make you stop and think about how you frame a fight. 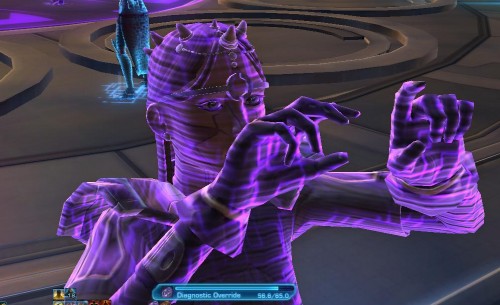 Yes, that’s right.  Terror from beyond – the boss that most people refer to as the “color boss.”  The colors are orange, yellow, blue, and purple.  With blue and purple looking about the same, and orange and red looking about the same too, there is no easy way to simply assign the color blind person to the color “easiest to see” because there is none.

On the first phase, it’s no problem.  Each color goes in turn, and it’s pretty easy to call out on voice chat when the appropriate color comes up.  But then there’s phase 2, where you have to find your musical chair before the 10 seconds is up. 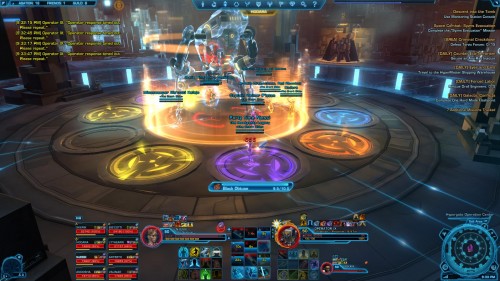 Now, how the fucking hell would you, could you, explain to someone which circle to stand in?  It’s just not possible! 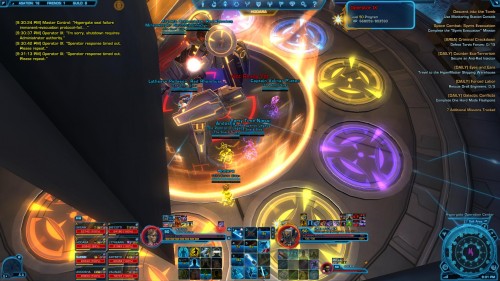 In story mode, it’s possible to simply have the color blind member’s color-partner run through BOTH circles of the appropriate color, but that apparently cannot be done in hard mode.

It has completely changed the way I think about this fight.  The first time I was in here, I thought “wow! This is fun and inventive!”  Now I’m frustrated with the damn thing because it’s virtually impossible for someone with a fairly common and mild disability.

So, yeah, not really sure what can be done.  “Not standing in red shit” is a fairly common raid boss trope, in many games.  But a fight that hinges on being able to make these fine distinctions between shades should probably be avoided in the future.

EDIT: Jaspor (check out his blog, guys) was nice enough to make one of my pix into a black-and-white rendition.  Yeah, I can’t tell the circles apart worth a crap now! 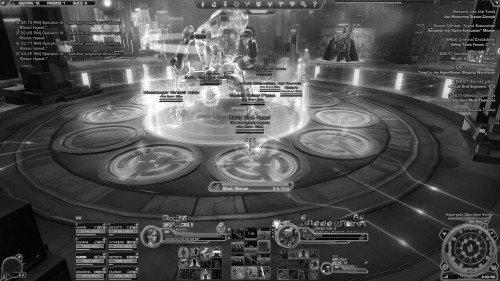