Note: I didn’t get paid for any of this or get freebie equipment.  QQ.  Photos are from the official product websites.

In the last few years, I’ve been gradually “going geek” and getting more and more sophisticated stuff to feed my gaming habit.  As I get more and more gaming crap on my desk at home, I have to accept that I don’t really have a “home office” that would be considered respectable.

All of my hardware purchases have been to solve a specific problem that I was having with the game… I’d say “wouldn’t it be nice if…” and sure enough there was an app, I mean item, for that.

Vent Push To Talk, I Am Out Of Fingers

Back in the day, I was primarily healing with mouse clicks and modifiers – and as such, both left and right hands were occupied while healing, and I was just OUT of fingers to talk on vent.  I’d have to pause what I was doing, and that’s never any good.  “Wouldn’t it be nice,” I thought, “if there were a foot pedal for that?”

At the time, wow had not come up with their foot pedal.  There was no mmo-dedicated vent pedal.  I did a google search and found the Stealth Switch II,1  based on Stealth Switch 1 that used a foot pedal to close all your windows when the boss comes by. Well that will work just fine.  I’ve been using it for over 2 years now.  The geeky thing is that I have to play barefoot or I botch my PTT.  Overall, though, it was pretty quick and easy to adjust to the change. 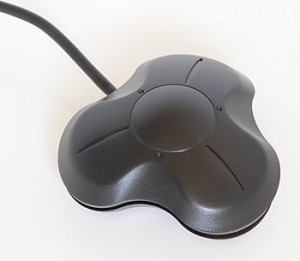 I Am Very Right Handed

Hotkeys are supposed to be triggered by the left hand while you use your mouse to do mouse things, especially as a healer to click targets.  But I simply sucked at timing ANYTHING with my left hand.  This is why on a Nintendo controller, the jump key is on the right hand side.  I ended up using modifiers + mouse.  I ran out of buttons on my 3-button mouse, so I bought a 5-button mouse.  When that got crowded, I got a Naga.

This took forever to learn, I’ll be honest.  I started out just using 2 of the side buttons in the same positions as those on my 5-button mouse (in the photo below, that would be 3 and 6) and gradually added hotkeys as I started feeling more comfortable.  I used the little “trainer” stickers for weeks.  When they fell off, I put on my own stickers, which were cut-out bits of fuzzy Dora the Explorer stickers (shh don’t tell). 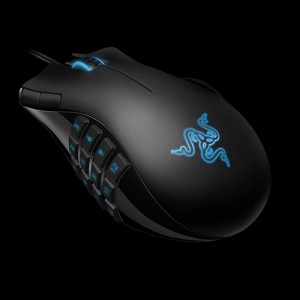 I Am Literally Not Using My Left Hand, Except To Move Around

I was using my left hand to wasd, and that’s about it, because you never know when you have to move, gotta keep the fingers in the right place.  For those who are going to say “NOOB, don’t keyboard turn” I say – YOU try to move around with the mouse while you’re also selecting heal targets with said mouse.  So shut it.

Enter the Nostromo, my newest toy.  I can use my left thumb to move2 leaving the rest of my fingers free to do STUFF.  In this case, cooldowns.

It wasn’t as steep a learning curve as the naga.  It wouldn’t have been a learning curve at all if I had chosen not to use the thumbpad to move.  Training myself to thumb-move instead of W to go forward took about a week.  I hit dailies pretty hard to practice before the next raid, and I died a lot by effing up my buttons and targeting (or autorunning into a pack of mobs and forgetting how to stop).  Since the buttons are configurable (you can map to any key) I went through quite a few configurations (and deaths) before settling upon one that would not cramp my hand.

There is no “right” gaming peripheral, and nobody needs them to be competitive.  But if you start noticing an inconvenience in your setup and saying “wouldn’t it be nice if” and you have some cash to spend, see if there’s an item to solve your specific problem.

BUT FIRST… do your research!  I cannot stress this enough.  For example, I have small hobbit hands.  The gaming pad that one of my (male) guildmates uses is WAY too big for me to comfortably use.  Read reviews, look at videos that describe the features, and see if it’s right for you.  Test out the peripheral at a store, if you can (Fry’s sometimes has the geekier things, whereas it’s unlikely you’ll find these at Best Buy).