I know you’re jonesing to marathon game right freakin now because KOTFE just launched, but you need to save some of that drive for November 7, 2015, for the Extra Life Charity Gaming Marathon. 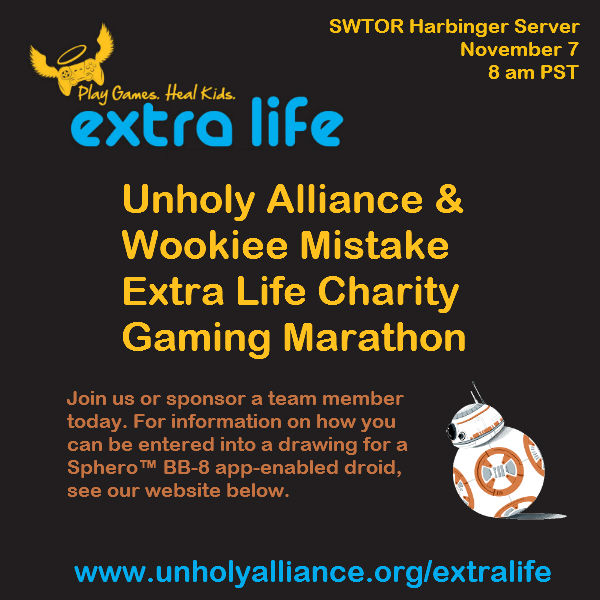 And here’s my personal promise to you.  If you participate in this thing, you have a Get Out Of Hall Of Shame Free card for life.  I’ll delete any pictures of your horrible garb that I currently have or obtain in the future.1  You can dress up like Santa-with-underboob and do the chicken dance in front of me on the fleet and I can’t do shit about it.  You can create a character on the Harbinger server for the event named “Ilikeboobs” or “Scrotumjedi”, post the pictures on Twitter, and laugh at me while I gnash my teeth in dismay.

Rest of the details are here:

Extra Life is part of the Children’s Miracle Network charity which is a highly rated organization for hospitalized kids. Participants choose which hospital to sponsor by playing for either a full 24­-hour marathon or a 12-­hour half marathon. They ask their friends and family to sponsor them like a bike­athon or 5k. There are some prizes to be won this year, including a Sphero BB-8 droid, SWTOR Cartel Coin Cards, Cartel Packs, rare in-­game items and other Star Wars related prizes that will be announced as the event draws near. Portions of the event will be streamed by Vulkk. Some of the player events this year will be:

The team is hosted by the guilds Unholy Alliance (Imperial) and Wookiee Mistake (Republic) on the Harbinger server but ANYONE is welcome to join the team or sponsor a member­­ no guild membership required at all. To sign up, go to unholyalliance.org/extralife.